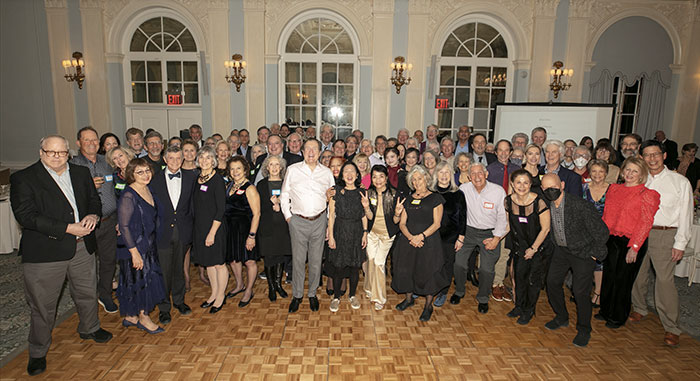 Our photos are here and our video of Jumpin’ Jack Flash is coming soon!

Our 70th Birthday Bash, held over the Martin Luther King’s weekend in NYC, was truly fabulous.  Friday night cocktails in the stately Trumbull Room of the Yale Club got off to a great start with close to 60 friends reuniting for the first time in years (if not a decade!)  Cary and Chris Whipple were also able to join us.

The Highlights of the Met Tour on Saturday at 11 am was unfortunately limited to 25 participants but a great treat to see the Met through the eyes of an experienced docent.  Cathy Sullivan and her husband, Henry Stevenson, toured the Met on their own since we had hit the maximum number allowed for the guided tour.

The Peking Duck lunch at 1 pm at the Peking Duck restaurant in midtown Manhattan was a real treat for the 42 attending and the restaurant did not disappoint.  We were all stuffed to the gills!

Cocktail Reception and Dinner and Dancing at the Grand Ballroom of the Yale Club.

Negronis and Gimlets and hors d’oeuvres. A truly memorable moment came when Susan Leath and Chip Carey discovered that they were supposed to have met when they were freshmen (arranged through Susan’s older brother, Paul Jones (Y68) and were now doing so for the first time 52 years later!

Another great story was from Andrew Tung and Jeff McAulay (the tailgaters extraordinare of our Class, having tailgated at The Game and others for over 50 years with their wives and the Altonjis) as told by Andy:

The first Yale course we took that led directly to a paying job was not in the humanities or sciences but in food service – my roommate Jeff McAulay and I took a one-hour mixology course on the second floor of Commons that was a pre-requisite to tending bar at University dinners, receptions and class reunions.  Not only did we get to stay in New Haven after spring classes ended to serve and observe the 40th and 50th year reunion attendees (how did it get so late so soon), but there were other perks as well.  Once we were dispatched to an event on Hillhouse Avenue; while carting our bottles and glasses through the back door of the appointed mansion, we came upon Kingman Brewster at the kitchen table in his shirtsleeves, digging into a pork chop before having to face yet another group of faculty or alumni.  Our president was in fact quite gracious to a couple flustered underclassmen, and we chatted for a few minutes before all straightening our ties and moving on to the evening’s festivities.

I must add that both Andy and Jeff were disappointed that the one-hour mixology course used only water instead of real alcohol!

After a truly delicious dinner (kudos to Chef John Johnson), we toasted our class with Iron Horse Vineyard’s Year of the Rabbit sparkling wine kindly donated by Joy Sterling.

From 9-11, Steve Ballou and the Skokorat band (with his brother Ted Ballou (Y76), daughter Eloise Ballou, Scott Hamilton, Rip Westmoreland, Seb Perry, and son-in-law Artiom Komorov) with David Lopato joining on keyboards rocked the house with songs from the 70s including Dancing Queen (my request), Norwegian Wood, Twist and Shout, Gloria, Like a Rolling Stone, Wild Thing, Born to be Wild and many more.  Everyone was on the dance floor having a blast!

Kim Rosenfield said that “[o]ne of the reasons I was so joyful dancing is that last year at this time I was using a walker and we weren’t sure what to do about my terrible pain. I had major back surgery end of April and was out of commission for 3 months. I am so grateful it was successful and that I can dance, and travel, and walk thru the Met….”  I was also part of the bionic crowd with my total hip replacement in March. Jeanne Ferris Petit, who sadly was not able to join us also had hip replacement surgery last year.

The frequent request was not to wait another 10 years to have another bash.   We won’t have to since our 50th Reunion is coming up in 2025!  Looking forward to seeing everyone then!